Is the Gold Trade Back? 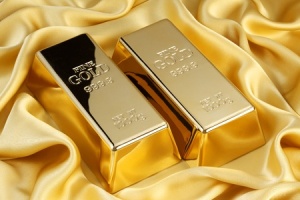 One of the longer running and at times nastier debates among the investment community may be set to ignite again.

For some reason the debate on whether or not one should own some gold triggers emotions like few others – at least when it comes to finance. Indeed gold enthusiasts or gold bugs are called names such as fondlers , misanthropes and guys with John Birch Memberships.

When gold has a price pull back of 20-30% financial media gleefully tells us of a bursting bubble, while a similar decline in a beloved stock or markets in general are encouragingly labeled as buying opportunities.

After a three year losing streak gold appears to have awoken from its slumber, notching a first quarter return of more than 15% (as measured by GLD ETF), and more than a few people are taking notice.

Tuesday on CNBC, Solita Marcelli JP Morgan Private Bank’s global head of fixed income, currencies and commodities noted that they are recommending to their clients “to position for a new and very long bull market for gold.”

Speaking at least week’s annual Sohn Investment Conference Stan Druckenmiller, the man who engineered the infamous takedown of the British Pound Sterling by George Soros revealed that his largest fund holding is gold via the GLD ETF

The rational behind the calls rests largely with a global financial environment that now sees negative interest rate policy from the European Central Bank as well as Japan. In addition, the Chinese economy has been under duress and is likely to pursue significant stimulus and further devaluation of Yuan.

To be sure the opinion is not unanimous. Goldman Sachs head of Commodities Jeff has been negative on gold, based on anticipation of Federal Reserve interest rate hikes. There is however a growing belief that one of the reasons the Fed has backed off a bit in pursuing further hikes, is the continued turmoil it could cause China as the aforementioned Yuan has a (collared) peg to the U.S. Dollar.

Followers of Austrian School Economics obviously have a strong belief in the power of gold to hedge against the excesses of government excess. The tricky part comes in making investment and allocation decisions, particularly in light of the fact that that financial assets such as stocks and bonds also benefit from expansionary central bank policy and a growing trend to purchase or “hold” distressed assets.

One way investors can with such decisions is to utilize a core-satellite investment approach.

As always speak to a financial advisor who is familiar with your background, resources and objectives before making investment any investment decision.

DISCLAIMER: Nothing in this article should be construed as a personal recommendation or advice. Nor should anything in this article be construed as an offer, or a solicitation of an offer, to sell or buy any investment security. Barnhart Investment Advisory Principal and clients may hold positions in securities mentioned above, and subject to change without notice. Consult your investment professional before investing.